The brilliant Luke Wright is writing a series of 10 blogs on his experiences as an Inn Crowd performer,

“So, here we go. This is first of ten blogs I will be writing from the pub. Yes, after twenty years of writing, performing, teaching, and curating poetry I have finally managed to contrive a way of being paid to go down the pub. God bless The Inn Crowd scheme….. The plan is for me to sit in the pub for a few hours and get on with my business of writing poems”

Including poems and observations, they are a brilliant read – you can find them on his website here https://www.lukewright.co.uk/blog/ 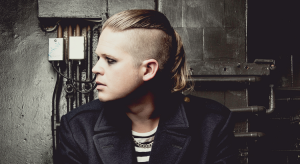 The Infamous Lord Byron Causes A Stir in Norfolk!

Inn Crowd has had some pretty varied characters tour as part of the project, and the subject of this blog is no different! The most notorious 19th Century romantic poet Lord Byron (a.k.a Paul Huntley Thomas from Proteus Theatre Company) has been touring rural pubs in Norfolk, Suffolk and Cambridgeshire this past month with ‘Mad, Bad, and Dangerous to Know’, spinning delightfully shocking yarns about his life, and we’re told he’s been sparing no detail! His final date in East Anglia is at the The Birdcage pub tomorrow night (Wednesday 23rd May) as part of the Norfolk and Norwich Festival, and he’ll be hitting Kent on Saturday 9th June, where he’ll no doubt regale pub goers at The White Lion in Selling in just the same way. We caught up with him ahead of these dates, so let’s hear what he had to say…

“Being one of life’s natural sybarites and a traveller, both physically and metaphysically, the idea of touring to public houses and allowing the stout yeoman and women of the rural community to catch a glimpse of my glory was an opportunity not to be passed up. I intend to regal them with some extracts from my works and with some choice morsels from what can only be described as ‘a life well lived’. No subject will be taboo and those of a delicate constitution are advised to bring some strong restorative with them in case they are overcome by the power of my oratory. I am assured that they will find me as fascinating as I find myself!

Describe your show in five words:

What are you reading right now?

Full details of the show at Norfolk and Norwich Festival can be found here.

Check out our What’s On page for details of the show at The White Lion in Selling, Kent.

Critically acclaimed local wordsmith Luke Wright performed his first Inn Crowd show last week, on 26th March at The Burston Crown in Norfolk, and treated audiences to an inventive and engaging mix of new and old material, spinning stories about 21st Century British life with wit and a political twist. 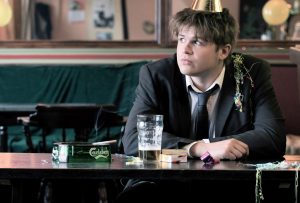 To celebrate his first Inn Crowd performance, Luke has written a blog post on his own website, detailing his experience of performing in a rural pub. Check it out here: http://www.lukewright.co.uk/the-inn-crowd/

If you didn’t get chance to catch it in Norfolk last week, Luke’s next performance of ‘Down The Pub with Luke Wright’, the show he specifically created to tour with Inn Crowd, will be on next at a special showcase at the Sweet Dukebox Theatre at Brighton Fringe Festival on Sunday 6th May. More rural pub performances are expected to be announced, both in Kent and Sussex and East Anglia, so do keep an eye on the Inn Crowd website for more info!

The Inn Crowd project has played host to some of the UK’s finest writers and poets, and our third season includes the brilliant John Osborne, whose stories and scripts have been hugely popular on BBC Radio 4, Sky 1, and other national platforms. His nationally acclaimed debut show, ‘John Peel’s Shed‘ (based on his real-life experience winning a box of records on the late John Peel’s BBC Radio 1 show) toured to rural pubs with Inn Crowd throughout 2017 to great success, and we’re delighted to welcome him back to the project with his new storytelling show, ‘Circled In The Radio Times‘. Here he is below, telling us what he loves about being part of the INN CROWD and the joys of touring to pubs: 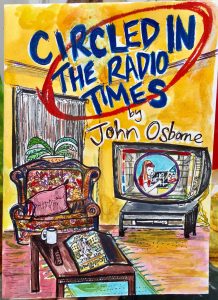 “John Peel’s Shed was a show I wrote in 2011 and took up to the Edinburgh festival. When I first read about the Inn Crowd I knew it was the perfect opportunity to get out my record player and my box of records and perform the show again. I’ve been lucky enough to be able to go from pub to pub to perform the show again. There’s something special about watching a storytelling show in the front room of a pub.

Life is little more than a series of excuses to go to the pub. They are important places in our communities. None of us see our friends as often as we like or get to meet new people. What’s been so special about going to so many pubs in towns and villages is seeing the ripple effect that good, interesting projects can contribute to people’s everyday lives. I love performing my shows but mainly it’s good to be reminded of how important it is to do something slightly different. To take a risk and to see what’s going on in the pub down the road.”

John Osborne’s new show, ‘Circled In The Radio Times‘ is described as “deceptively layered and delightfully cosy storytelling. A 15-tog hug of a show” in The Stage, and is taking bookings NOW for Spring/Summer 2018. from landlords who want to offer their punters the chance to experience this master of storytelling. Contact Creative Arts East if you’re in Norfolk, Suffolk and Cambridgeshire, and Applause for pubs in Kent and Sussex.

Welcome to our first INN CROWD blog post! The third season has now kicked off with a bang, thanks to wordplay alchemists Dr Illingworth and Mr Simpson’s tour of Norfolk and Cambridgeshire with their brand new commissioned show ‘Holmes & Watson: The Case of the Rhyming Crime’. This was Inn Crowd’s first ever co-production, and using Arts Council England funding, Illingworth and Simpson created this spectacular take on Arthur Conan Doyle’s Sherlock Holmes adventures specifically to tour to rural pubs as part of the Inn Crowd project.

The show has just completed its East Anglian run with roaring success, wowing audiences with their razor-sharp exchange of words The Wheatsheaf, The King’s Head and The Burston Crown in Norfolk, and The Dun Cow in Cambridgeshire. Audiences described it as a “Brilliant performance, expertly portrayed, a subtle blend of mystery and comedy.” What did Mr Holmes and Dr Watson think of their experiences in Norfolk, you may ask? Well, in between solving crimes, Dr Watson managed to find the time to write us a little tour diary:

Holmes had managed his own arrangements, and so we agreed to rendezvous in Norfolk. Taking the train from the capital afforded me time to contemplate our upcoming adventures: the English countryside steaming past providing the perfect bucolic backdrop to my meditations. I partook of a new eatery and a cuisine: I believe this ‘Leon’ and his ‘sweet potato falafel wrap’ will do well in London, and perhaps further abroad. Holmes and I were well met in Sherringham: a delightful settlement that boasts of being North Norfolk’s premier seaside town. Holmes, naturally, was less than impressed. However, we had clients to meet! We made our way in haste to The Wheatsheaf, in nearby Holt – where the reception was warm, and the hospitality convivial. A triumph!

Sunday 11th February
We rose with the dawn, a dull and grey day greeting us. “Somewhat appropriate”, Holmes remarked, considering our next appointment at The Dun Cow. Perhaps Holmes has a sense of the poetic in him after all! We journeyed to the public house some 60 miles away: a truly rural locale, we were gazed at with more than a little wonder. No doubt our fashionable London attire – three piece suits, bowties, pocket watches – somewhat marked us as strangers in the area. Nevertheless, once again Holmes was in excellent form and swiftly solved yet another case, causing much merriment amongst the local populace.

Monday 12th February
Another day, another town: the rather unfortunately named Diss. Disrespect was the last thing on our minds at The King’s Head, where a room made available to us to conduct our investigations. Justice swiftly dispatched, Holmes introduced me to his automotive form of transport – a ‘Fiat 500L’, if I recall correctly – and a most marvellous contraption that saw us safely through the unpaved, dark, and at times quite narrow, roads of Norfolk. On a more personal and dismayed note, I swear that Holmes showed more affection for his motor than he does to his most loyal companion!

Tuesday 13th February
Our tour of the Eastern County concluded at The Crown, Burston, where it appeared that everybody from the village (and perhaps further afield!) turned out to witness our endeavours. A truly pleasurable evening in the company of fine publicans and people – indeed, a common refrain throughout this expedition. We retired for the evening as applause burst forth from the pub and into the bitterly cold air. As I bid farewell to Holmes at the train station, I confess to feeling some anticipation for our next escapade. I have a premonition that The Case of the Rhyming Crime is not yet fully solved. The game is still afoot, it seems!

Missed the show? Don’t worry, it’s set to tour to Kent and Sussex in June with the help of Applause! If you’re a landlord based in that area wanting to treat your punters to this brilliant show, get in touch with Applause here!

For more info on the real-life performers behind ‘Holmes & Watson: The Case of the Rhyming Crime’, check them out below: